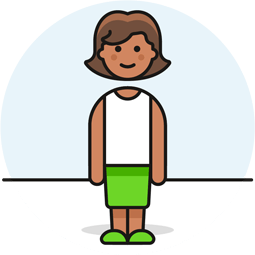 Terpsy includes a feature called "core consumers". It lets you centrally manage your deaf and hard-of-hearing consumers, while allowing each of them to choose which information they share with different organization. It also lets each organization manage their own version of each consumer. Read-on to fully understand!

In your area, the same deaf and hard-of-hearing consumers interact with multiple organizations. For example, Sarah attends classes at Johnston University, and goes to Dr. Smith as her primary physician. Both happen to be your clients, but Sarah doesn't share the same information with her school as she does with her doctor. She prefers to use her school email address for education assignments, but her personal email address for medical dealings. That is possible because each organization has its own version of her information.

Note: notice in the above screenshot that the same consumer appear multiple times. The core consumer at the top is what tells Terpsy that the consumers below are the same person, even if they use a slightly different name, different email addresses or even physical addresses, etc.

Associating consumers with a core consumer

Whenever you, another staff member, or a customer creates a consumer, agency staff can (must) associate that person with an existing core consumer, as shown on the screenshot. If this is the first time anyone has ever added that person in Terpsy, you would just create a new core consumer for that person (which only takes two clicks).

Tip: only staff and the consumer himself/herself can edit a core consumer's information. You can think of the core consumer as the sign language agency's version of that consumer. 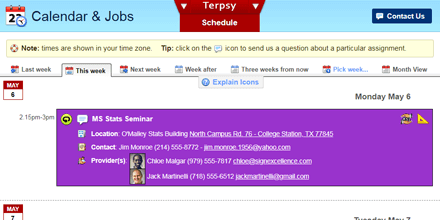 Terpsy includes a module called "Consumer Schedule" that allows each consumer to log into Terpsy to view their upcoming appointments, see which interpreter / transcriptionist is assigned, etc. Terpsy shows appointments regardless of organization, since it knows that different versions of the same person is in fact the same person. (Terpsy knows this because they're all associated with the same core consumer!)

The notion of core consumer may feel confusing at first: but all you have to do is associate consumers with a core consumer. The benefits are enormous: for consumers, it allows them to view all their appointments in one place, and to share only the information they want with the organization they want. For businesses, the feature is invisible: they just create and edit consumers as needed.

Example: once Sarah graduates, Johnston University will mark her as inactive in Terpsy. But this will only deactivate their version of Sarah. She remains active for Dr. Smith, nothing's changed.